Ever since we were children, we’ve been taught that the American system of government is the most progressive, democratic, and overall best system ever invented. Of course, we believed that with all our hearts back then. When I was in school, America was the shining light of the western world. We were the good guys guarding the world against totalitarianism. We’d thrown off the moral stain of slavery, and we were reaching for the stars. What child wouldn’t buy into that?

As early as the 1960 presidential election we saw that there might be a flaw in that ointment. Had the founding fathers, for all their wisdom and good intentions missed something? What the hell was this absurd construct known as the Electoral College, anyway? Shouldn’t an alleged democracy elect its president by popular vote? In 1960, Kennedy won 303 electoral votes, 33 more than the minimum for victory. But charges that Cook County, Illinois may have stolen the election, and Illinois’ 27 electoral votes, are still unresolved today. 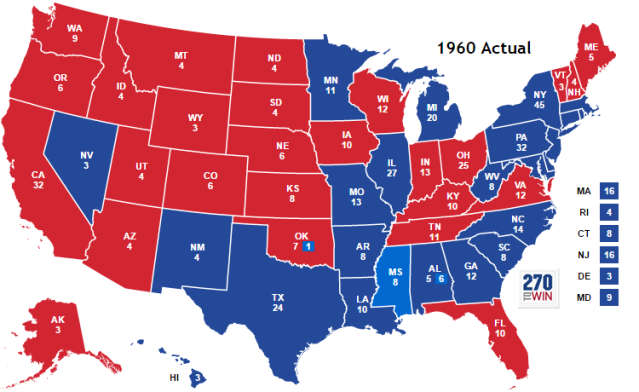 Without Illinois, Kennedy would have had 276 votes, but there’s more to the story. 1960 was the beginning of the change from blue to red states in the deep south, and many segregationists rejected Kennedy’s progressive agenda. Fifteen such electors chose to ignore their states’ popular vote counts and cast their votes for the segregationist Harry Bird (note the pale blue on the map).

Imagine the chaos that would have ensued if Illinois had gone to Nixon, and the fifteen electors who disregarded their states’ votes had recruited seven more to their cause. Awful as that sounds, the entire scenario was perfectly legal under our Constitution. When the Electoral College is polled, individual electors may vote however they choose.

If 1960 wasn’t a sufficient wake-up call we had the party-splitting challenges of Eugene McCarthy in 1968, John Anderson in 1980, and H. Ross Perot in 1992, who despite receiving nearly 19% of the popular vote failed to capture a single electoral vote, and contributed greatly to Bill Clinton’s landslide victory. In 2000, Al Gore won the popular vote but lost the election to George W. Bush when the Supreme Court stepped in to award Florida to Bush. And last year, of course, we had Donald Trump winning the electoral vote count despite losing the popular vote by more than three million.

Is there something wrong with this picture? Why hasn’t it been fixed? The reason, of course, is partisan politics. The majority party in Congress will never act against what it perceives as its self-interest, and it’s clear that abolishing the electoral college would greatly disadvantage Republican candidates. But the flaws in our system are much deeper than the electoral college. What appears to be a system of reasonable checks and balances (remember how our teachers stressed that in civics class?) is also seriously undermined by partisan politics and gerrymandering.

In 2000, the Democrats claimed that the election had been decided by a politicized Supreme Court. The idea that the high court is apolitical has always been a fiction, but perhaps it’s time we looked more closely at the consequences of that pretense.

A more serious concern may be the constitutional provisions for removing an unfit president from office. Those procedures were put in place by the founders to protect the nation from the unthinkable possibility that a president not in full control of his faculties could do serious harm to the country. One, of course, is the possibility of impeachment. The constitution discusses impeaching a president who commits “high crimes and misdemeanors,” though those terms are not clearly defined.

However they’re defined, those so-called crimes are not things to be evaluated in a court of law. They’re interpreted by the Congress, which throws everything back into the partisan political arena. The 1868 impeachment of Andrew Johnson involved no crime as such, but was based his firing of Secretary of War Edwin Stanton. Congress viewed this as a violation of the Tenure of Office Act, which was enacted the previous year specifically to be used against Johnson and repealed in 1887. And the impeachment of Bill Clinton, as we all know, was based on his attempt to cover up sexual improprieties. Neither was anything like what the founders intended.

As unpopular as Donald Trump is with Congressional leaders, the likelihood of impeaching him is purely a function of how the Republican Congress perceives it would affect their own futures.  It would take an action as egregious as Trump’s brag about shooting someone in downtown Manhattan to overcome the political realities.

Likewise, the twenty-fifth amendment was passed in reaction to the complete breakdown in office of Richard Nixon. The Congress intended to patch a dangerous hole in the Constitution by passing it, but all it actually did was create another potential situation that could be neutralized by partisan politics. So what if our own respected leaders and allies believe our president is flying off the rails toward oblivion. So what if he violates international agreements and protocols. It’s worth asking what it would take for Vice President Pence and at least half of the Cabinet to agree that Trump had to be removed for the good of the country. And could such an action be taken quickly enough to save us from disaster?

What a tragedy it would be if years from now, our children looked back on this and could only lament, “If only our parents’ generation had acted rationally….”

1 Response to Our Flawed Constitution